The USS Oriskany CVA-34 is a US Navy aircraft carrier popular by fishermen and (technical) divers.

One of the best known and largest artificial reef dive sites in Pensacola is the US Navy aircraft carrier USS Oriskany CVA-34. With a length of 911 feet, beam of 146 feet and 150 feet tall, she is a brilliant dive site large enough for many interesting dives. Its name is coming from the Battle of Oriskany during the American War of Independence, but other names such as the CV-34, CVA-34 and Mighty O are common as well. Nowadays she lies at only 22 miles southeast from Pensacola at depths between seventy and more than two hundred feet. She is the first ship sunk intentionally as part of a navy reef program in order to reduce the size of its inactive ship inventory. The future will tell us what other famous ships have been scuttled in Florida.

The Oriskany CVA-34 was built as a navy aircraft carrier in the New York Naval Shipyard in 1945 and served in the Korean War and Vietnam War. Another historic event connected with this vessel was that President Kennedy used her to impress the Cubans and Russians during the 1962 Cuban Missile Crisis. She was also the airplane carrier from where Senator John McCain launched his plane before he was being shot down in Vietnam. She was used in the creation of blockbusters named 'The Bridges at Toko-Ri' and 'The Men of the Fighting Lady' both from 1954. After its many years of good service she was decommissioned in September 1976, locked up in a storage area in Washington. It wasn't until September 2003 that she was given permission to be used and prepared as an artificial reef dive site for the purpose of recreational and technical diving. Contractors and navy crews created blast holes, sealed off doors and removed loose scrapings from the wreck finishing in April 2004. Weather conditions such as the hurricane season and legal paper issues about permits caused for another delay of two years. Finally, it took more than five hundred pounds of explosives to blast the holes in its sides that sank the carrier in less than an hour on the morning of May 17, 2006.

Its most impressive part, its carrier island lies in waters of seventy feet deep and can perfectly be visited by advanced divers. Recreational scuba divers can safely visit the aft and forward gun platform both at about 95 feet deep. Deepest part for recreational divers is the top of the bridge located at 109 foot deep. Its bridge and flight deck control are largely dismantled leaving a ship which is hardly recognizable anymore compared with its former glory. Its flight deck and lower structure are at depths below 135 feet and are suitable for technical divers only.

This rusty aircraft landing ship is a very young wreck which has given few time to create a spectacular and divers underwater habitat. It is a must dive for divers who love its interesting history and we would also suggest it is best for technical divers only as they can fully investigate the wreck, while recreational scuba divers can only see the island. She is going to be a fishing hotspot as well as a diving spot, where goliath grouper, ocean sunfish, snapper and jacks are popular and are starting to appear already. 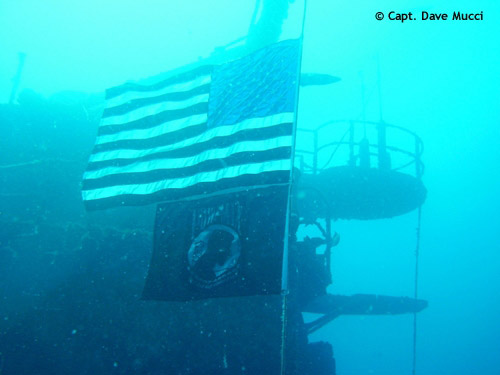 My brother and I fulfilled my mothers last wish and I made a cement cast in the shape of a heart and placed her ashes in it. We then held a memorial service for her on mothers day of 2007 and we placed her heart on the flightdeck of the Oriskany at 138 fsw. This summer solstice (June 21) I will be making an attempt to touch her heart while freediving.

Also, as a footnote, out of respect and honor for those who have served and made the ultimate sacrifice aboard the USS Oriskany I have placed the American and POW flags on her yardarm at 85 fsw. I maintain them on a constant basis to make sure they are represented in a good light.