9 Foot Stake used to be named after a marker of nine foot high that stood on top of the shallowest part of this reef.

Dive site 9 Foot Stake is nothing more than a beautiful and shallow reef. There used to be a nine-foot piling connected on the shallowest part of the reef during low tide, but a boat seems to have removed it. The remnants of a twelve foot high lighthouse provide shelter and a safe living place for smaller animals such as Spanish hogfish, goatfish and hermit crabs. The Navy-Air Development Corporation used this reef a lot for testing which occasionally results in interesting findings. Boats can moor at one of two mooring buoys.

Nine Foot Stake is often used as a third dive of the day after some deeper dives in the area such as the Cayman Salvage Master. Snorkellers and photographers will also have a great time here as there is ample light and often good visibility. Huge brain corals, bristle stars, coral mounds, nudibranches, anemones and schools of tropical fish are present here. 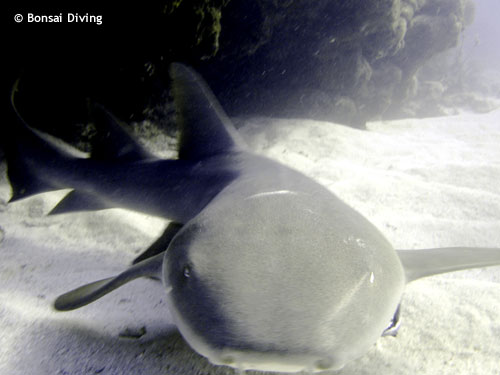 This site, named after a 9 ft stake (actually an 8 " diameter pipe) which marked the reef to keep deeper draft vessels from running aground is situated approximately 7 miles SE of Key West Harbor. The old stake was knocked over by a fishing vessel and now sits on top of this reef in the NE corner.

This is a typical patch reef with coral spurs divided by sand grooves running north/south. This reef has a great variety of marine life but is especially noted for its resident nurse sharks, moray eel, and transient sea turtles, eagle rays and hammerheads. Larger solo hammerheads have been spotted here regularly during the spring tarpon season. This site is a popular second dive after doing the Cayman Salvager since the depth makes the whole dive like an extended safety stop. There are only two NMS balls here to tie off on, which restricts the number of dive boats. Anchoring here is illegal unless a diver sets the anchor in the sand to avoid coral damage.