Just outside the coral reef line at about seven miles SE of Key West and one mile SW of Nine Foot Stake sits one of Florida's greatest shipwrecks. The Cayman Salvage Master or Cayman Salvager was built in 1937 in Wilmington, Delaware under the name of Lieutenant Colonel Ellery W. Niles. She was meant to be used as a Cable Layer but was converted to a United US Army Minelayer but changed during WWII. In her years of service she has also been a Coast Guard Buoy Tender, Navy VIP ship, freighter and drug runner. Her name was changed to F.V. Hunt when researchers including Dr. Frederick V. Hunt started to use her for marine acoustical experiments. She was seized while transporting drugs to Key West commanded by an ex CIA agent. During the Muriel Boat Lift in 1980 she transported over 5000 Cubans to Key West. After being seized in KW Harbor, the vessel sank at the dock. Refloated in early 1985, the vessel was towed out to sea when the tow line snapped and she sank, laying on her port side in 89 ft just East of the end of the Ships Channel. Later, Hurricane Kate moved the wreck in its upright position later that same year.

The wreck features a large cable spool on the bow and an open engine room aft. Its pilot house was removed prior to its sinking, but nevertheless she still has a profile of more than twenty feet.  Many fish are attracted to it and you will often be swarmed with them here. Penetration is only recommended for divers who are accompanied by an experienced local DM Guide.

Marine life is great at the wreck. There are several resident jewfish of over two hundred pounds, several moray eels, an octopus, barracudas, snook, a large loggerhead sea turtle, and schooling permit and jacks commonly on the wreck. Thisis generally a low current, higher visibility dive site and is excellent for photography. 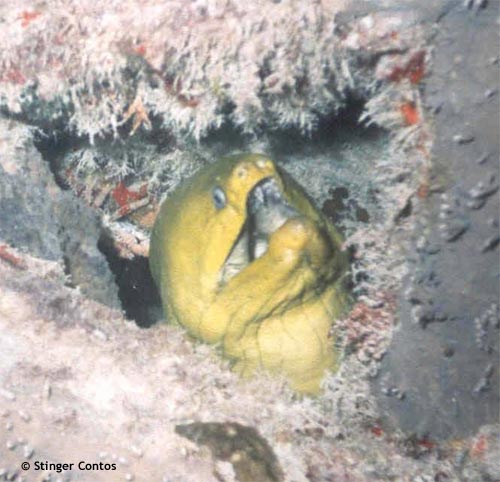 Enjoy the comfort of a high speed catamaran, with a max of 6 divers on board, to the best dive sites around Key West. We feature unrestricted bottom times, guided wreck penetrations, better sites, unparalleled customer service, a perfect safety record, and a laid back attitude to ensure that you get the most enjoyment from your trip

An excellent dive even for novices! This wreck was never part of an artificial reef program. It was being towed out to a spoil area in deeper water when the line snapped. There are many loose parts inside and most doors are still working inside. The engines, instruments, and even fire hoses are all still in there. There is no evidence of holes blasted in the hull. Katrina was in 2005, apparently It was Kate that righted the wreck. Penetration aft and more than one level is not recommended.

Artificial Reef Programs removed doors, entanglements and stripped loosed parts. They blasted openings in its hull to create a wreck for fishermen with a high flow through the wreck that attracts many game fish. On August, 1985 she sank on her port side in waters of eighty foot deep before she reached her planned final destination. Divers got even luckier when hurricane Katrina moved the wreck in its upright position later that same year.

The tiny bow sheaves are still easily seen and were apparently typical for those Army mine planters. Three bicycles have been left recently on the wreck to add some extra entertainment.