The Benwood sank after it collided with the Tuttle because they both were sailing without lights afraid for German submarines.

The Benwood was an English merchant cargo vessel that sits on the northern portion of the Key Largo National Marine Sanctuary just a mile offshore. She was built in 1910 in Sunderland, England as a 360 feet long ship with a beam of fifty feet. Several stories have emerged about how she was lost by some tragic events during World War II, on April 9, 1942. Its most likely story is that she collided with the Robert C. Tuttle who was on its way to Texas. The Tuttle had just left Tampa fully loaded with phosphate rock and was on its way to Liverpool, England with a stop in Norfolk, Virginia. Both ships travelled with no lights because they were afraid to be detected by German U-boats. They saw each other in the last minute when it was too late to prevent a crash. The 544 foot long Tuttle was able to continue its journey while the Benwood was quickly taken water and had to start saving its crew in the dark. Another unproven story is that she had to go to shallower waters where she was torpedoed by a German U-boat. Supposedly they had a fire on board which made it easy for the Germans to give her its final blow. Whatever story is true, her bow was destroyed after its sinking to prevent navigational accidents and her hull was to close to the surface and levelled down by bombing practises, aerial artillery and/or dynamite.

The Pennekamp Park staff has placed four mooring buoys and one spar buoy connected at the vessel located between French Reef and Dixie Shoals. Things which can be seen underwater are ballast stones and some rotten timber. Its hull is intact but has been damages substantially because of its collision and bombings. Follow the ledge off its bow for one hundred feet and you will spot an old anchor which is not that of the Benwood. Some simple locations where you can enter the ship can be visited by all divers. There are also some very small openings which shouldn't be entered by untrained wreck divers. Just seaward from the outer most buoy you can find Benwood's outside wall which is an excellent quiet wall dive at eighty feet deep.

This wooden wreck has been under water for over fifty years now which is long enough to get inhabited with a lot of marine life and excellent coral growth. Tiny sponges, some fire coral and sea fans are growing on its metal sides. Goatfish, glassy sweepers, parrot fishes, snook and barracudas are some of the fish guarding, playing and patrolling on and around the wreck. Tiny jawfish can be spotted peeking out of the sand. You even might see a male jawfish with eggs in its mouth. He holds them there for about five days until they are mature and swim out of his mouth to find their own holes in the sand and start their own family. The wreck is excellent for all level of divers, snorkellers and even night divers find this dive spot perfect to see many invertebrates and bioluminescence. Keep your eyes on the wreck as there is hardly anything to see in the surrounding sand. 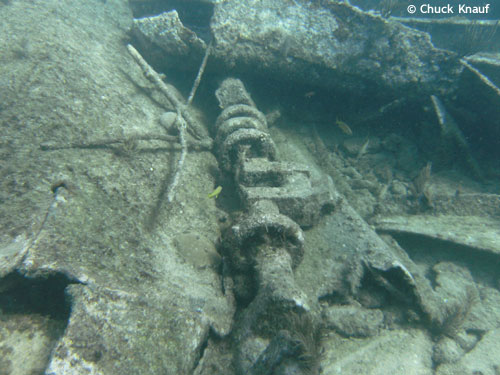