The Gunsmoke is a small shrimp boat named after a gunfight between marijuana smugglers and teens.

The Gunsmoke was a shrimp boat which nowadays lies in eighty feet of water twenty miles south of St Petersburg. Its history is one of drugs smuggling, gunfights, kidnapping and murder. The small vessel was used for smuggling marijuana into Florida, but different stories arise about how they finally got caught. One story tells us that the boat was scuttled by the owners themselves leaving a wreck with several floating bales of marijuana left for the Coast Guard to investigate. They supposedly had found a crewmember shot in the head below deck. Others say that there was a gunfight between some local college kids that happened to be near the boat, hence its name Gunsmoke. The crew was just unloading the soft drugs and the person on the lookout panicked and shot one of the kids. What happened next was a chase between the crew and the teenagers. The teens got caught, kidnapped, murdered and were finally dropped somewhere into a sinkhole more than one hundred miles away. Coastal Patrol Boats finally caught the killers and the lookout was sentenced to death row for the murder of all four kids in 1999. What is true about these stories remains unclear, but we do know it is an interesting wreck to dive at and it is quite sure that the wreck sank because of illegal activities.

This partially buried wreck is slightly listed to starboard these days and has collapsed amidships. Caution is necessary as there are still many shrimp fishing nets which make it easy to get entangled for the incautious divers. Its rusting hull is loaded with baitfish creating a dive site very popular for spear fisherman as well as divers. It is one of the best dive sites in the area with a hell of exiting background. 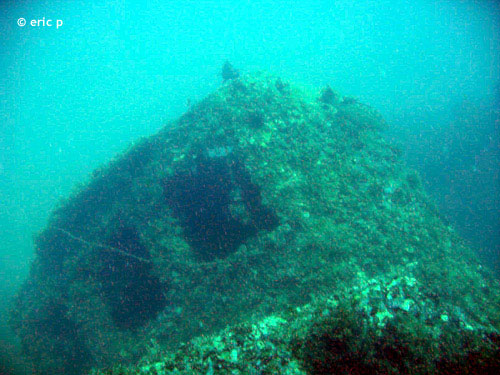