Dive site Mike's Wreck is believed to be a part of one of its neighbouring wrecks.

Mike's Wreck is located at only one hundred yards east of Elbow's lighthouse. She is an unknown steel-hulled barge located between marker buoys E2 and E3. A lot of arguing and guessing has been done about its ship history, and many people believe it are remains of neighbouring wrecks such as the Tonawanda, Train Wreck or Civil War Wreck.

Nowadays, the reef has overgrown two larger parts of its bow and stern, while many smaller sections are scattered around the place. This makes it a paradise for all kinds of smaller reef fish inhabiting the small steel pipes and other remnants of its original ship. Its clear waters because of the Gulf Stream, its shallowness and white sandy bottom all add up to making it one of the best places for macroscopic underwater photography. Several types of parrotfish, angelfish and butterflyfish are frequently spotted in this area. 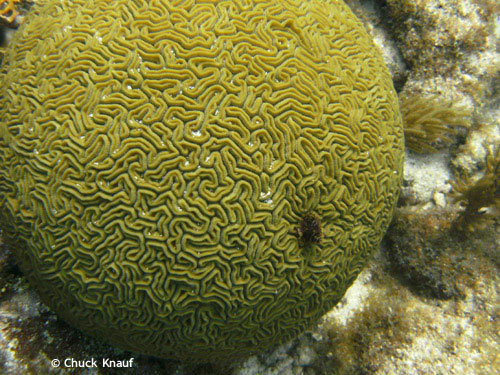